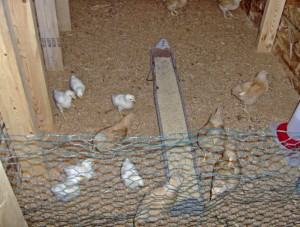 I have finished major construction on the chicken coop, which means that there are some smaller details that need completed but it’s finished enough for the chickens to move in. In case any of my readers are interested in building their own coop, I wanted to give a step by step of how I made mine.

I figured on four square feet per bird which is a bit generous but I figured it would give me a little extra room if we ever wanted a few more birds. So I made the coop 4 ft x 8 ft but that what I didn’t think about was that that would be the outside dimension and the finished inside dimensions would be a bit less. Not a big deal though. 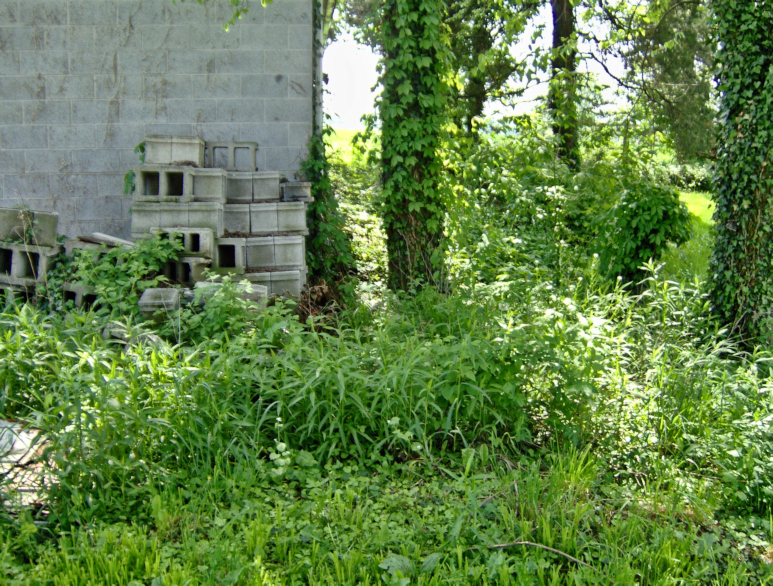 This was the location we chose. It made the most sense as far as the trees and the adjacent building providing some shade in the summer time as well as serving as windbreaks in the winter. It was certainly not the easiest location to work with though. 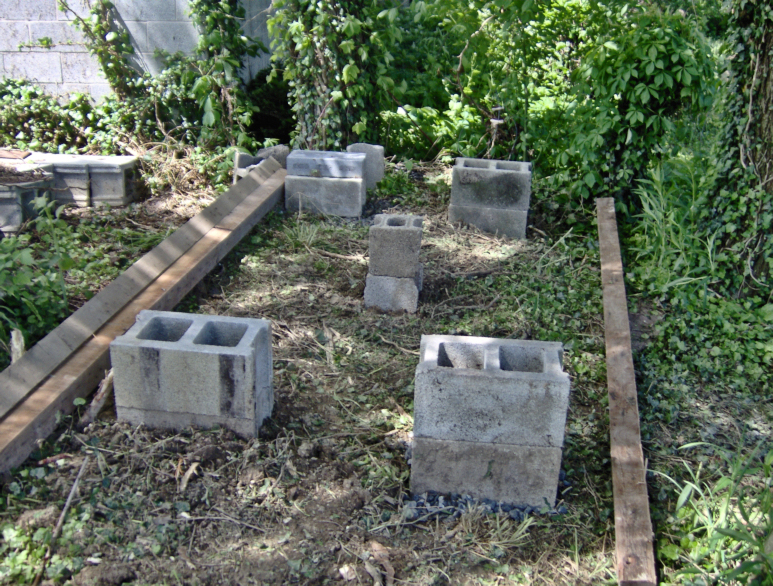 The first step was to put in a level foundation. This was probably one of the most frustrating aspects of the entire building process. Working with uneven ground, having to chop through tree roots and using a tiny little level was not fun at all. The blocks are not mortared together and not not concreted in the ground. I wanted to be able to move the coop with relative ease should be decide on a different location at another time. Eventually I got all four corners mostly level, and came to a point where I said, “It’s just a chicken coop.”  This phrase would be uttered many times as construction continued. 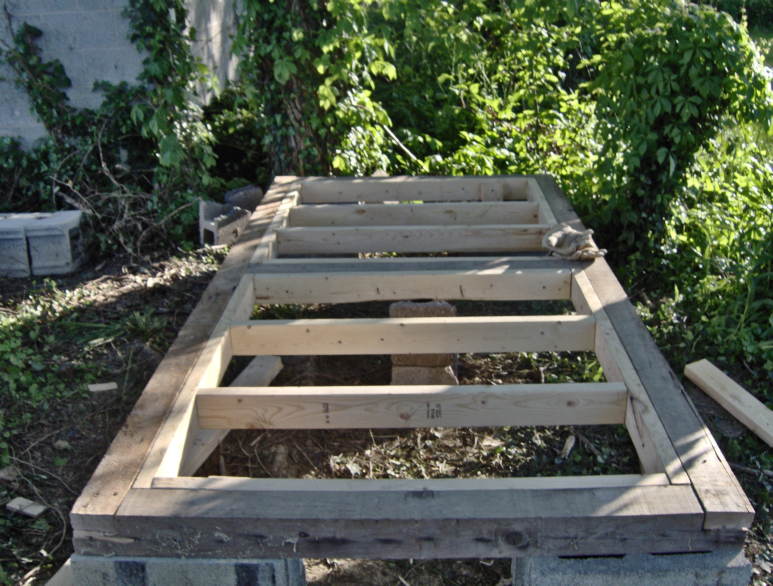 The floor was made up of 4 x 4’s around the outside edge and as a center support and 2 x 4’s in the interior. I cut the ends of the 4 x 4’s with 2 inch deep and four inch long grooves so that each piece would fit into the other. Not completely necessary but I think it adds a bit of strength to the building. 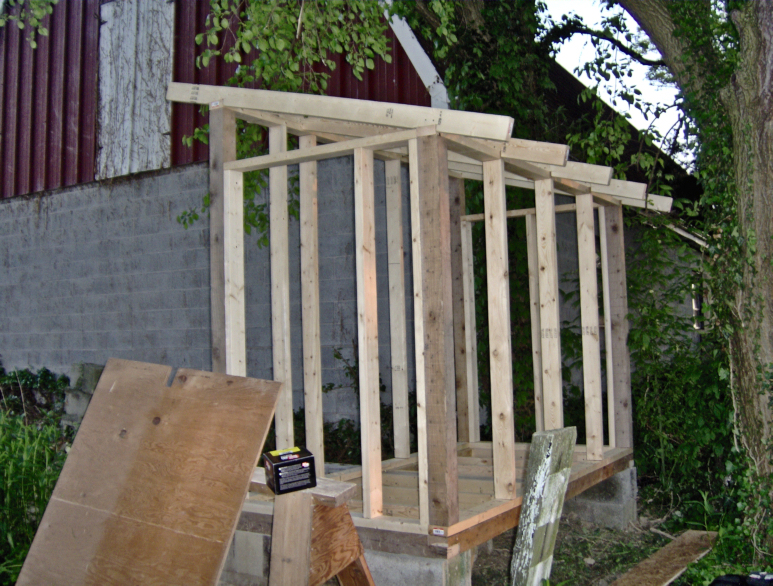 Framing was relatively easy. The front wall is 6 ft high and the back wall is 5 ft high. The coop certainly didn’t need to be this tall but being able to walk inside of it should the need arise is going to be nice. The rafters are 6 ft long, so they stick out a foot in the front and back. This is for a little bit of weather protection. Had I thought of it I would have had the roof stick out a foot on each end as well. 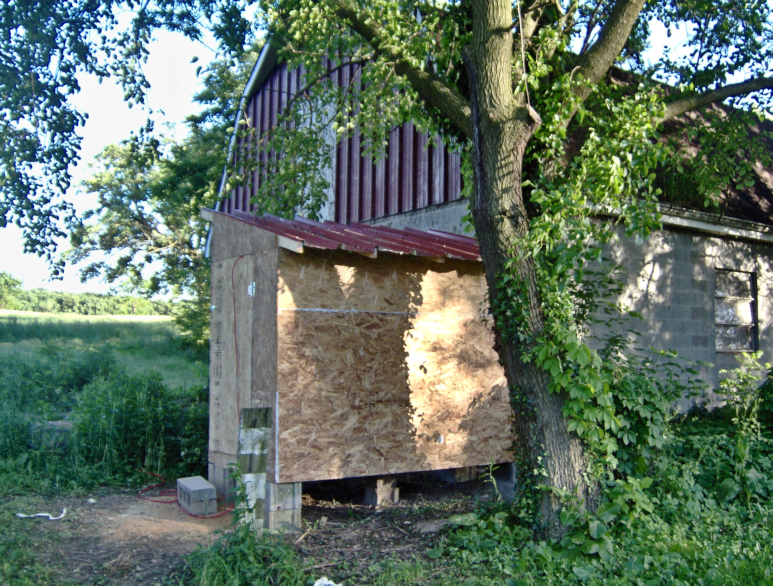 This is a view of the back of the mostly finished coop. Eventually there will be a hatch in the back that can be opened to reach in and get eggs from the nesting boxes. Eventually there will also be nesting boxes. The metal on the roof was leftover from 25 years ago when the metal was used for the sides of the adjacent building so it matches nicely. 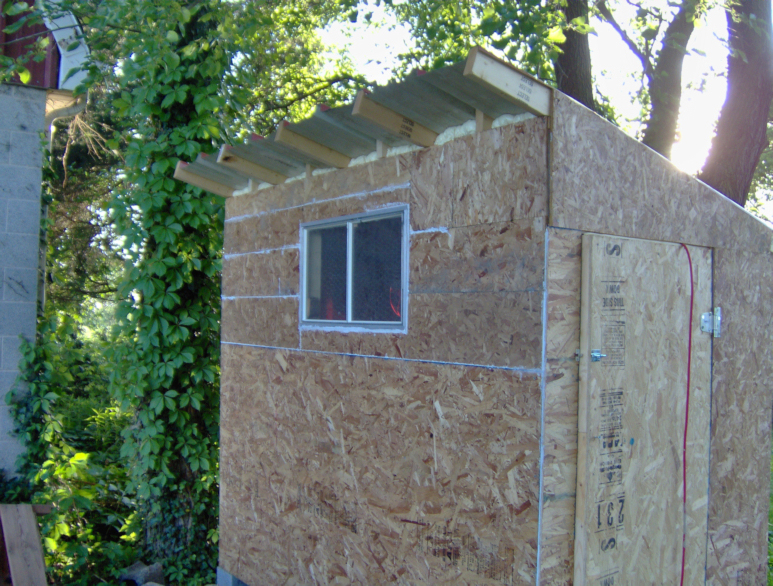 The window is slightly off center. That is because we decided to use a different sized window after I had already framed the building and had to move a stud to accomodate the new window. The smart thing to do would have been to move the studs on either side an equal amount, but it’s just a chicken coop. The nice thing about this window though is that it opens outward. The lines of white stuff on the walls is silicone caulk. As you can see I started using thin strips of aspenite on the wall as I started to run out of wood. Not all the cuts were completely tight so the silicone is to fill in the gaps. The foamy stuff up at the roof line is that stuff that’s meant to fill in small gaps in houses. I was at the end of my construction knowledge and didn’t know how to do soffit properly so we just filled in the holes with that stuff. The result is a bit ugly, but it’s just a chicken coop. 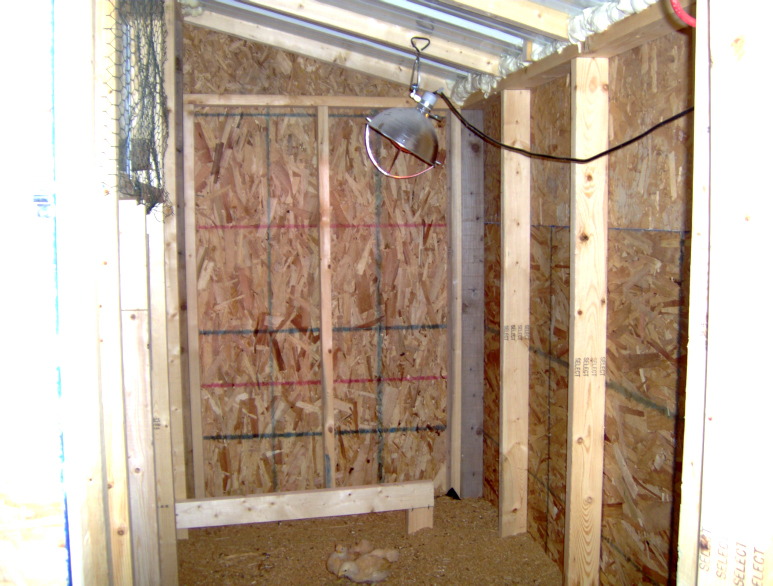 This is the interior. I have a low temporary roost for our little chickens. Once they’re bigger I’ll build them something proper. I have chicken wire over the window on the inside to prevent escapees and to keep predators out. 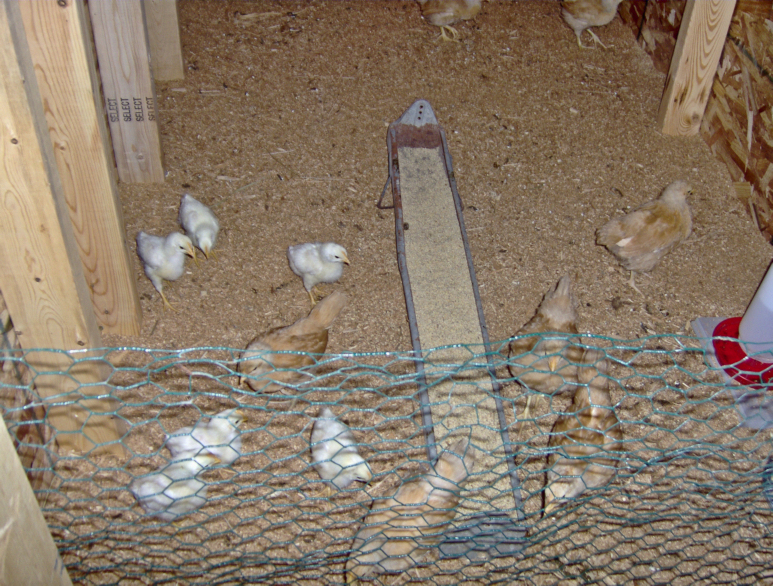 And there’s our chicks, complete with six little ones that were given to us. The large ones are our buff orpingtons, the little ones we don’t know what they are. I also put chicken wire in front of the door so they don’t run out when we are taking care of them.

There you have it. That’s my chicken coop. It’s far from perfect but it was fairly cheap compared to some others I’ve seen and it was pretty easy to build. A coat of paint and a few things like roosts and nesting boxes and it will be complete. I hope this is helpful to others who are starting their chicken journeys. Don’t worry too much about perfection and try to keep in mind one thing: It’s just a chicken coop.

It’s a great time to own an Xbox

, Playstation 2, or Gamecube because the games are dirt cheap on the internet, and to some extent in local stores though you need to search harder for bargains when buying locally. Four years ago I bought an Xbox. At the time the price was $150. I then bought two games at $45 each and an extra controller which I think was about $30 at the time. All told I spent more than $250 initially. Those first two games were Star Wars Episode III

, which is pretty terrible, and Madden NFL 2006

, which I have played extensively.

That was the end of my video game buying though. I couldn’t afford any more games and my disappointment in the Star Wars game made me leary of investing more money in the Xbox. And so it sat barely used until recently when I discoverd that Xbox games were being sold for next to nothing on sites like Amazon. Sure the games might be four or five years old but they are new to me.

So I’ve compiled a list of the best Xbox

games available for the cheapest prices through Amazon. And if you don’t have a system

yet those are cheap too, going for about $50.

The Best Xbox Games for a Fraction of the Original Price

There you have it, you could add 15 of the best Xbox games to your collection for $47.83. That’s what one game would have cost you a few years ago but now those of us who just aren’t cool enough to own a new system can get endless hours of gaming pleasure for a fraction of the original cost. Go buy yourself some cheap games and enjoy your outdated video game system, I know I’m enjoying mine. 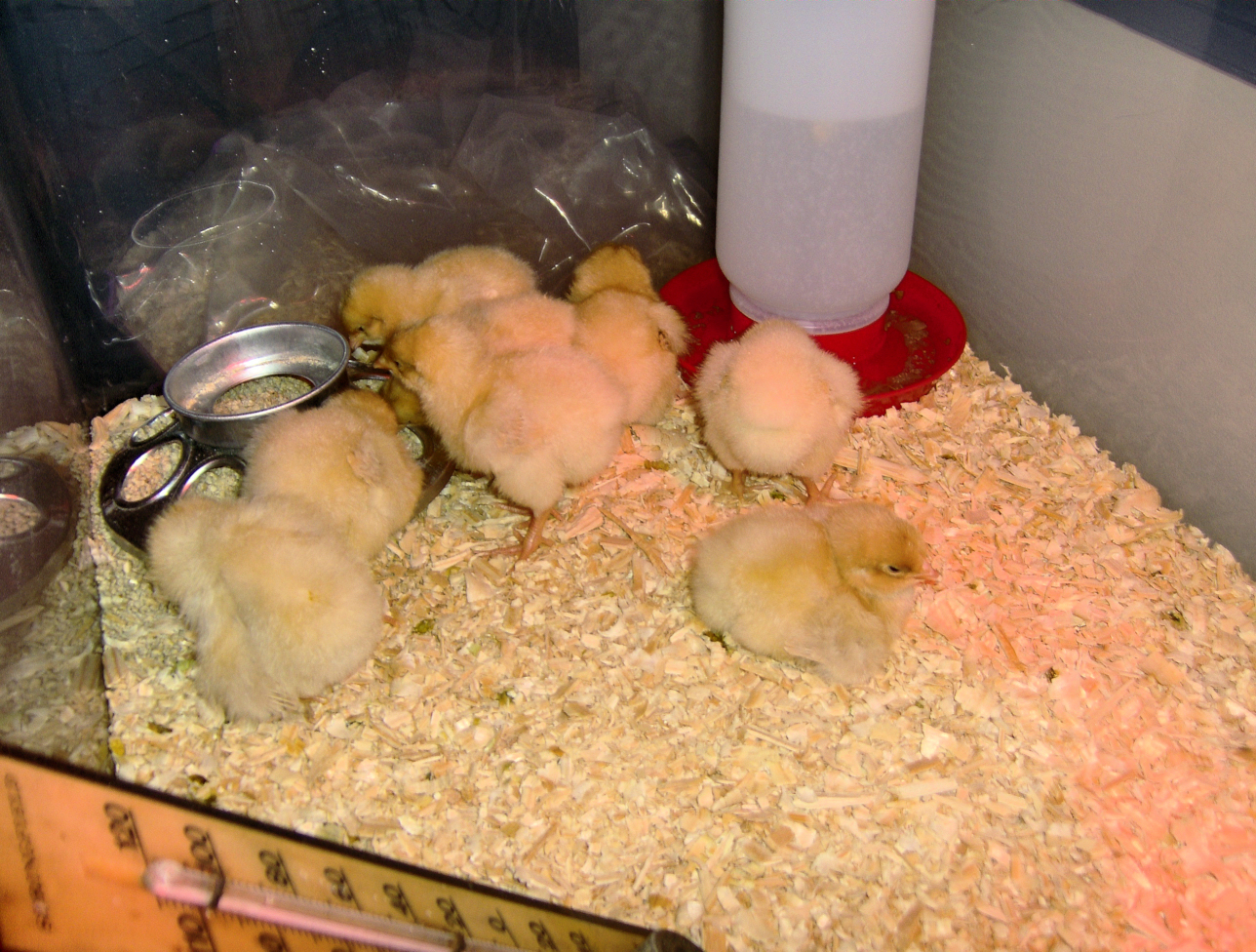 This video was in response to someone telling me I ought to bite the head off of a real chicken…obviously that’s not something I would do.